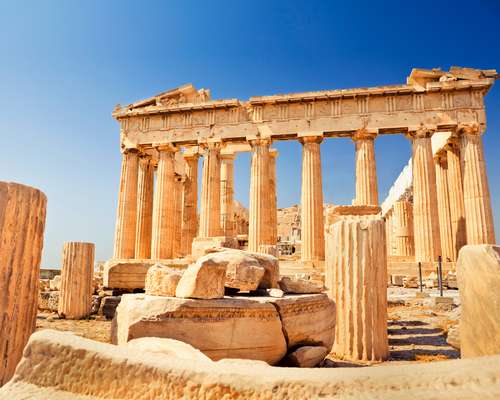 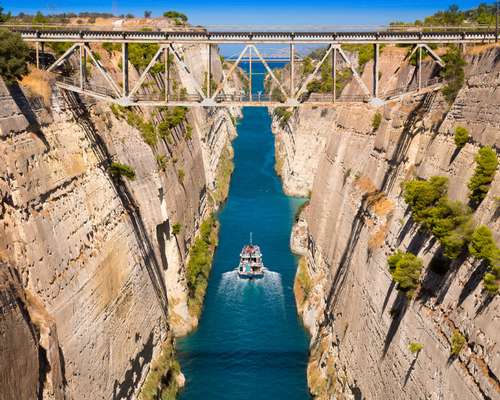 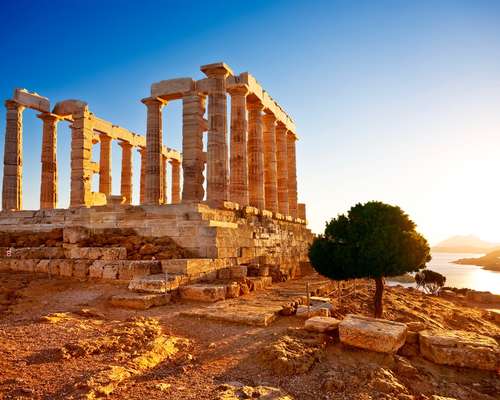 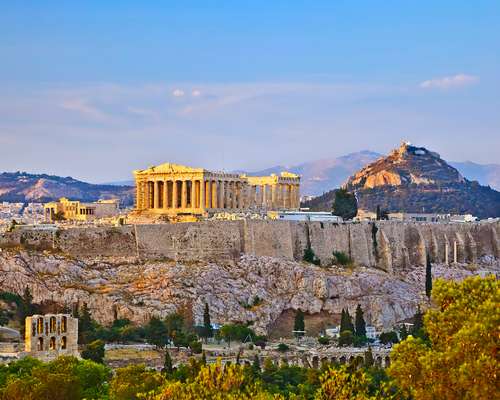 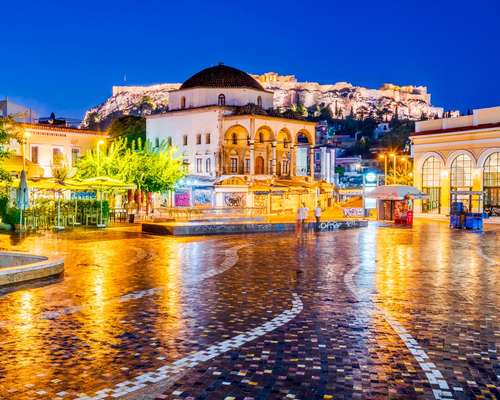 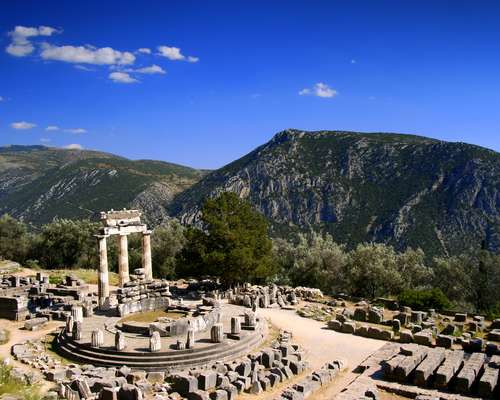 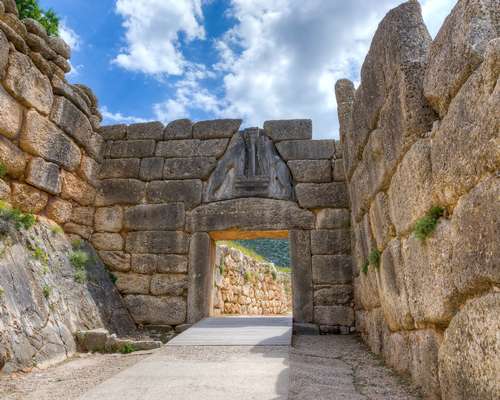 Excursion to Cape Sounion: Guided visit of the Temple of Poseidon, Countryside dinner

Saronic Gulf Cruise: Departure transfer, Day cruise with stops on the Saronic Islands of Hydra, Poros and Aegina, Transfer from the pier

A dream comes true as your wide-bodied jet thunders off the airstrip, Europe-bound. Time for a meal, a movie and a nap. It gets light again, first off the left-hand side of the airplane, then everywhere. It's morning, and Greece!

You may want to stroll in the lively Plaka district, or ride the steep funicular railway up Mt. Lycabettus for a fabulous view of the city.

Enjoy a coach tour of Athens, old and new.

See modern Athens, with the Greek Parliament, the 1896 Olympic Stadium, the Plaka district and Syntagma Square, where you may see the picturesque Evzones goose-stepping their way through the Changing of the Guard ceremony at the Tomb of the Unknown Soldier.

A local guide, well-educated and specially-trained on the history and culture of Athens, will accompany your group.

Visit to the Acropolis

Visit the awesome monuments built by Pericles on the Acropolis during Athens' Golden Age in the 5th century BC. On that hill, the goddess Athena reigned supreme. You'll see the Propylaea, the Temple of Athena Nike, and the Erechtheion with the Kore Porch, famous for its Caryatid columns.

Sightseeing stop at the Parthenon

Of course, you'll visit the centerpiece of the Acropolis, the 2,500 years old yet ageless Parthenon. For this huge temple dedicated to the goddess Athena, architects skillfully avoided straight lines and right angles to counterbalance the unsightly optical illusion called optical sagging, which deforms straight lines.

Visit to the Acropolis Museum

Delve deeper into antiquity at the contemporary archaeological museum open in 2009 at the base of the Acropolis hill, in the hope that it will one day house the superb and much disputed 5th century BC Parthenon Sculptures that were moved to England in the 19th century by Lord Elgin. For now, visitors can view a Permanent Collection with artifacts from the 7th century BC to the 5th century AD, and peer at excavations through a glass floor.

You may want to stroll to Hadrian's Arch, built by the Roman Emperor in AD 131, and to the colossal ruins of the Temple of Olympian Zeus, the largest temple in Greece, which dates back to the 6th century BC.

The road to Delphi bypasses some of ancient Greece's most famous sites, such as Thebes (where Oedipus slew his father and married his mother after solving the Riddle of the Sphinx), Livadia (which was thought to be the entrance to the underworld), and the double-peaked Mount Parnassos, 3,000 feet high, believed to be the home of Apollo and of the nine Muses.

On the other side of the Arahova Pass, the road descends through terraces flanked with almond trees to temples and cave where the Pythia's predictions exercised a powerful influence for ten centuries.

Visit to the archaeological site of Delphi

Discover one of the most beautiful sites of ancient Greece. Visit the Temple of Apollo, the foreboding Sanctuary of Earth and the Sacred Way, lined with the treasuries of the ancient Greek cities.

See artifacts and treasures on display at the Archaeological Museum, notably the celebrated bronze statue known as the Delphic Charioteer.

Let a guide well-versed in Delphic mysteries take you back to antiquity.

Consider a visit to the National Archaeological Museum, a "must see" for its death masks and larger-than-life Poseidon. The museum displays an impressive and thorough overview of Greek art through the centuries. Beginning with early Cycladic figurines and continuing through the Greek Bronze Age, the exhibits end with the glories of Hellenistic period bronzes and a collection of busts of Roman emperors. The highlights of the exhibition include the numerous gold artifacts found at Mycenae, the elegant Archaic koúroi statues, and the many examples of fine Classical sculpture.

Today's excursion takes you to Cape Sounion, a spectacular rocky promontory that overlooks the Aegean Sea at the southernmost tip of Attica. There may not be a better candidate for the site Homer called "the sacred cape."

Guided visit of the Temple of Poseidon

Discover the temple dedicated to the God of the Sea as it rises, in all its Doric beauty, framed by sky and waves. Your guide will tell you how it was constructed, c. 440 BC, on the ruins of an archaic temple destroyed by the army of the Persian king Xerxes. Lord Byron found inspiration on this site in 1810 for his poem The Isles of Greece,. You'll see his name carved on one of the columns, but no one can tell who's responsible for the misdeed.

Enjoy a traditional dinner on the way back to your hotel.

Set out for the port of Piraeus, gateway to the gulf named after the mythological king Saron, and enjoy a sailing day on this blue expanse surrounded by Attica, the Isthmus of Corinth, and the Peloponnesus.

Day cruise with stops on the Saronic Islands of Hydra, Poros and Aegina

Step ashore at Hydra Town, the main port on the island by the same name, where the former mansions of sea captains rise above the town's quaint harbor, now an artists' colony. Relax at a waterfront café or meander through narrow streets lined with art galleries and shops displaying gold jewelry or ceramics.

The next port of call is Poros Town. In the 4th-century BC, the great Athenian orator Demosthenes, who famously worked on his diction by speaking with marbles in his mouth, sought refuge from his Macedonian enemies on this small island. The temple where he found sanctuary now lies in ruins, but Poros' fame endures, its memorable sights enhanced by red-roofed villages and windmill-dotted lemon groves.

Stop at Aegina Town on the lovely isle of Aegina, which experts regard as the place where ancient Greek coins were first produced in the 5th century BC. At that time, Aegina was a prosperous maritime city-state which challenged Athens in war and in games, its sprinters often zooming past the Athenian competition. Narrow roads that wind past whitewashed houses lead up into the mountainous interior, bedecked with landmarks such as the temple of Athena Aphaia, the ghost town of Paleochora, and the seaside villages of Vagia and Perdika.

There's enough time on Aegina to book an optional excursion of your choice.

Day 7: Excursion to the Peloponnesus

Today's excursion takes you to the Peloponnesian peninsula.

Sightseeing stop at the Corinth Canal

Visit to the archaeological site of Ancient Corinth

Walk through the site of a very old Greek city that became the largest Roman city in Greece: in its heyday, the population of Ancient Corinth climbed as high as 90,000. Its ruins include notably the splendid columns of the Temple of Apollo.

In AD 51, when Paul the Apostle arrived in Corinth, the city had a reputation for immorality that earned his wrath. On the Agora, you will see the bema (platform), where Paul was dragged in front of the Proconsul and accused of sacrilege.

Guided tour at the archaeological site of Mycenae

Visit the oldest place on the European continent. Legend has it that Mycenae was founded by Perseus himself, while its origins and decline have long beguiled historians. Add your speculations to theirs at the well-preserved and extensive ruins, which include in particular the famed Lion's Gate, the Treasury of Atreus, the Tombs of Agamemnon and Clytemnestra, and the Circle Grave.

Visit the huge open-air theater, which is almost 2,500 years old and perhaps the finest of all the ancient Greek monuments of its kind. Listen to the sound of your voice here: you'll hear it as never before.

You will also visit the most celebrated healing center in antiquity: the Asklepieion, or Sanctuary of Asklepios, the Greek god of medicine. Known to the Romans as Aesculapius, he is often represented holding a staff with a snake wrapped around it: the Rod of Asclepius (Caduceus) became the symbol of medicine and, in our time, of the World Health Organization.

You may choose an in-depth tour of the Ancient Agora, the open "place of assembly" where ancient Greek men would come to hear announcements by the king or were assigned military duty.

You may return to the foot of the Acropolis for a visit to the Theater of Dionysus, which dates back to the 6th century BC.

This evening, head to Zafiro, a restaurant located on top of Attica Park Hill, where you will discover an amazing panoramic view of Athens. Watch a short cooking demonstration before enjoying fine Mediterranean cuisine, Greek music, and traditional dances by Dora Stratou dancers. Then, be Greek for a night as you join dancers and instructors on the dance floor, enticed by lively bouzouki tunes. You may even break a plate, as custom dictates!

It's the birthplace of Western Civilization that glides by under the right wing of your jet airplane as you head for home. Arrive home later today, eager to share your adventures with family and friends.