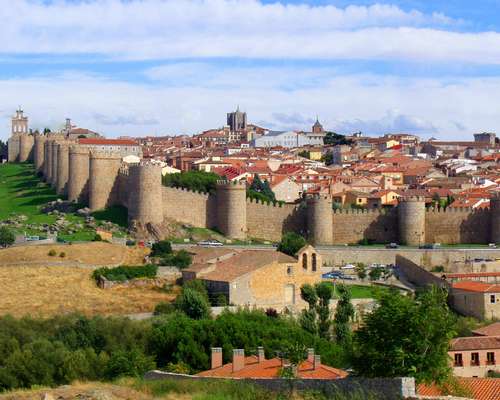 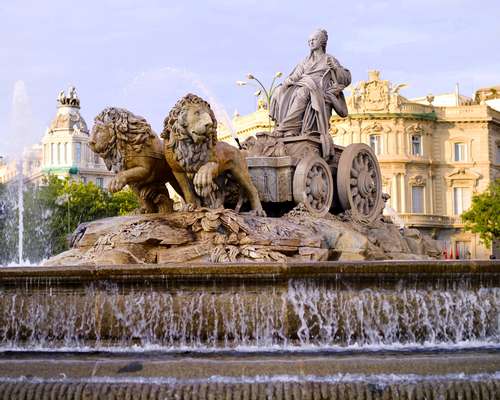 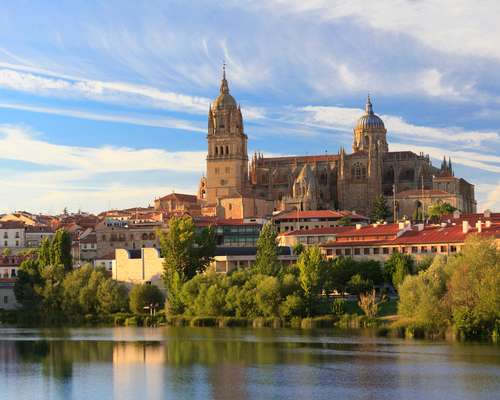 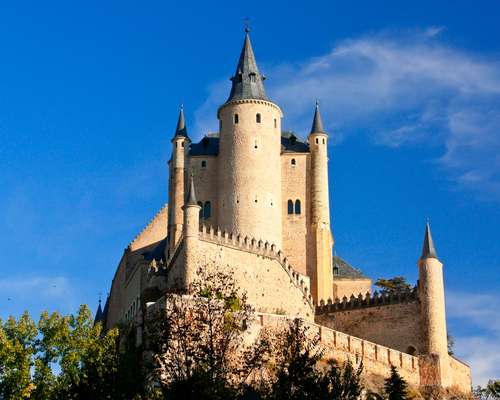 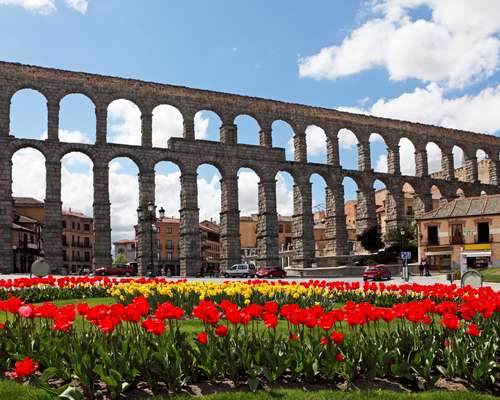 All breakfasts. All dinners. Flamenco dinner and show on Day 3. Cochinillo dinner on Day 7.

You may wish to visit the Centro de Arte Reina Sofía to view modern works by Dalí, Miró and Picasso, notably the haunting Guernica, a memorial to the victims of the Nazi bombing of a Basque village, long kept out of Spain because of the artist's refusal to recognize Franco's dictatorship.

Enjoy a ride on the teleférico that goes up to Casa de Campo, the largest public park in Madrid.

It's off to Toledo, a gem surrounded on three sides by the Río Tajo, which has cut a deep gorge out of the encircling mountains. Christianity, Judaism, and Islam coexist on the narrow streets of this ancient city, which was once the capital of Spain. Indeed, the entire panorama of Spain's history is etched in Toledo's churches, synagogues, Moorish mosques, and fortifications.

For centuries, Toledo has excelled in the manufacture of swords and damascene artifacts made of steel inlaid with gold and silver. Skilled artisans carry on the tradition, as you will see during a damascene manufacturing demonstration.

Consider a tour of the Alcázar, a fortress originally built by Emperor Charles V and which acquired worldwide fame during the early months of the Spanish Civil War.

You may want to visit the house believed to have been El Greco's.

In the evening, when the day-trippers have gone back to Madrid, Toledo's centuries-old charm is more vivid, the local color more palpable. Join the locals on a paseo (stroll) through the city center and feel the history.

Enjoy the ride to the "Town of Stones and Saints," which stands on an abrupt spur above the Adaja River, in the middle of a windswept plateau overlooked by the dramatic Sierra de Gredos.

Enter through one of the nine gates in the intact medieval walls, which date back to 1090. "Ávila of the Knights" was a city of importance in the Middle Ages, with its many Romanesque churches, and a great cathedral whose castellated apse was also a bastion of the city walls. Two of Christianity's greatest mystics, St. Teresa of Avila and St. John of the Cross, lived there in the 1500s.

Pause at a small hilltop shrine located a mile from Ávila. Back in 1522, the future Saint Teresa of Ávila, at the age of seven, was caught there by her uncle as she was running away with her equally young brother to seek martyrdom at a battle waged against the Moors. The site of Los Cuatro Postes affords one of the best panoramic views of Ávila's walled city.

Continue to an ancient university city celebrated in verse by the poet Miguel de Unamuno. Salamanca remains a Spanish Renaissance showpiece as it rises from the banks of the Tormes River, adorned with turrets and spires, historic houses and golden sandstone walls. Welcome to one of Spain's most beautiful cities!

Today, explore Salamanca on a walking tour led by local guide. You will see landmarks such as the Casa de las Conchas with its shell decorations, the Roman bridge and the Plaza Mayor, a former bullfight enclosure which is now one of the most elegant squares in Spain. It has been said of Salamanca's Plaza Mayor that "mere mortals cannot achieve anything greater."

Walk through the core of the campus of the eminent Universidad de Salamanca. Founded in 1218 by King Alfonso IX of Léon, it's Spain's oldest university and Europe's third oldest in continuous operation.

See the 15th-century and 16th-century buildings and patios (courtyards) of the Escuelas Mayores and Escuelas Menores, as well as the Archbishop Fonseca College, built in 1538 with an arcaded courtyard known for its medallions of Uomini Famosi (famous men).

Visit to the Old Cathedral

You will visit the Catedral Vieja, a most interesting example of Spanish Romanesque architecture that dates back to the 12th-century.

Visit to the New Cathedral

Enter the Nueva Catedral, whose architecture combines Gothic and Baroque features as it was built from the 16th to the 18th centuries.

Don't miss the public park known as Huerto de Calixto y Melibea, a romantic oasis set within the city walls that's often used for weddings. Named after the heroes of La Celestina, a 1499 novel by Fernando de Rojas, it tells the tragic story of a Christian Romeo and his Jewish Juliet that has inspired Spanish writers and lovers ever since. The park stands on the site where Calisto and Melibea are said to have met.

Today's coach journey takes you to Segovia, where Isabella, Christopher Columbus' sponsor, was proclaimed Queen of Castile. During the Middle Ages, a large textile industry created such wealth and influence that, by the 17th century, Segovia was almost a city-state and minting its own coins, the largest coins in Europe at the time!

On a walking tour led by your tour director, you will see why Segovia is said to resemble a "living museum," replete with ancient houses, splendid courtyards, a well-preserved Roman aqueduct and an imposing cathedral crowned by crenellated towers.

Visit the most-photographed of all the Spanish castles, El Alcázar de Segovia. With its perfectly-proportioned features, it has become a symbol of Spain's medieval heritage.

Board your coach for the journey to Madrid.

Continue over the sierras on your way to Spain's capital city.

¡Adios España! Madrid's airport recedes and you're 500 miles closer to home with each hour in the air. Race the sun westward, arriving home later today, eager to share your experiences with family and friends.