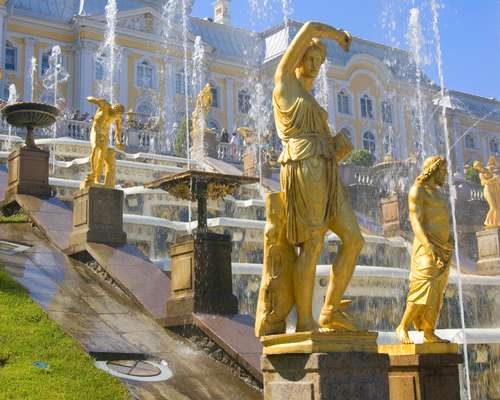 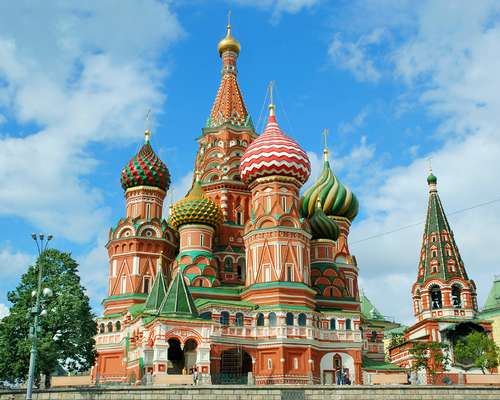 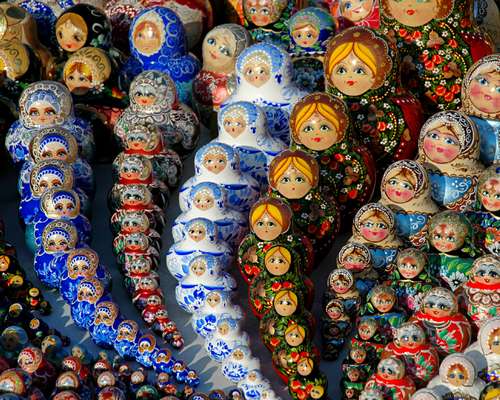 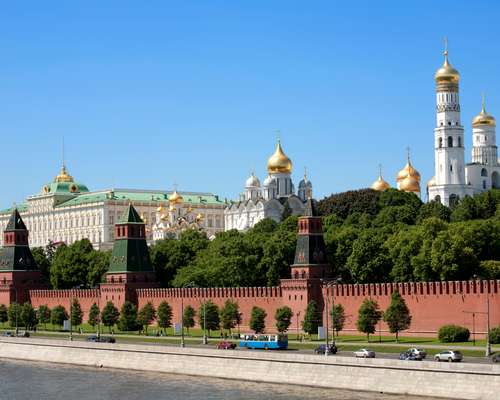 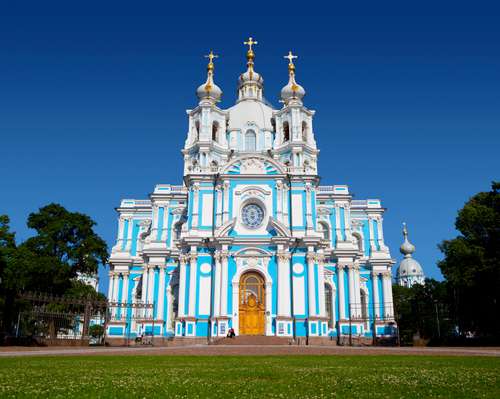 Excursion to Sergiev Posad: Trinity Monastery of St. Sergius, Cathedral of the Assumption

The Cold War and the "Second Russian Revolution" are now long over. Get set for a fascinating visit to that part of the former Soviet Union called Russia.

The Aeroflot (or American flag carrier) jet makes the night a short one, and soon you are landing in Moscow!

Meet your passports-appointed Intourist representative and continue to your centrally-located hotel. Settle in and then set out to explore the city with your escort.

City sightseeing includes Red Square (with Lenin's Tomb on one side, and the equally well-known GUM department store on the other), St. Basil's Cathedral (built by Ivan the Terrible in the 1550s to commemorate the capture of the city of Kazan), Tverskaya Street (formerly Gorky Street), and the Kremlin.

In town, you will also see the Bolshoi Theater, the forbidding façade of the Loubianka (once the headquarters of the KGB), the narrow streets of the old Kitaï-Gorod district, the banks of Moskva River and the Duma (Federal Assembly). Then motor up to the Vorobiev Hills (Sparrow Hills, formerly called Lenin Hills), the site of Moscow State University, from which you'll enjoy a panoramic view of the city.

A half-day local guide, well-educated and specially-trained on the history and culture of Moscow, will accompany your group.

Cathedral of the Dormition

A visit is included to the Cathedral of the Dormition, one of the most important church in Moscow as it is both the site of coronations and the burial place of Patriarchs of the Russian Orthodox Church. See the Iconostasis, the painted pillars and the Monomakh Throne of Ivan the Terrible.

On a tour of the Kremlin's Armory, you will view priceless treasures such as the Imperial Crown of Russia, the throne of Ivan the Terrible, the ceremonial robe of Peter the Great, jewelry, weaponry, imperial carriages, and precious Fabergé eggs.

On your visit to the Troitse-Sergiyeva Lavra, you will find yourself in an outstanding architectural ensemble recognized by UNESCO. It was founded in 1337 by Sergiey of Radonezh, who became Russia's patron saint and now rests in the gold-domed Trinity Cathedral. The tsar Boris Godunov is buried in the nearby Cathedral of the Assumption, built by Ivan the Terrible.

Cathedral of the Assumption

You will visit the blue-domed Cathedral of the Assumption (Uspensky Sobor), built in the 16th century by Czar Ivan the Terrible.

Pick up the pace with an exciting ride aboard a high-speed Sapsan (Peregrine Falcon) train bound for the city which was first called St. Petersburg, then Leningrad, and St. Petersburg once again. The city of the czars!

A city tour introduces the historic center of St. Petersburg, a city listed as a UNESCO World Heritage Site. See the avenue known as Nevsky Prospect, Kazan Cathedral, the Church of Our Savior on Spilled Blood, Palace Square with the Winter Palace (which was the main imperial residence under the Czars), the Hermitage, the Admiralty, St. Isaac's Cathedral and the Mariinsky Theater (renamed Kirov Theater during the Soviet era).

On the other side of the Neva River, you will see the University, Menshikov Palace, the Fortress of Peter and Paul, the Cabin of Peter the Great (dating back to 1703, when the Czar was building his dream city), and the heavy cruiser Aurora, whose guns rang out loudest in 1917, during the "first" Russian revolution.

A full-day local guide, well-educated and specially-trained on the history and culture of St. Petersburg, will accompany your group.

See the heavy cruiser Aurora, which fired the shot (a blank) at the Winter Palace that signaled the beginning of the Bolshevik Revolution in October 1917.

Visit the Peter and Paul Fortress, built by Peter the Great to guard the estuary of the Neva River. Later, it served as a garrison and as a prison for political prisoners such as Dostoyevsky, Gorky, Trotsky and Lenin's older brother Alexander. Its Cathedral is the resting place of most Romanov tsars.

Enter the cathedral whose gilded dome dominates St. Petersburg's skyline. One of the world's largest domed sanctuaries, St. Isaac's was big enough to accommodate 14,000 standing worshipers before it was converted into a museum in the 1930s. Visitors can admire the exterior facades and, inside, spectacular paintings and sculptures.

Your visit includes an ascent (300 steps) to the observation walkway known as the Colonnade, which surrounds the base of the dome. You'll be rewarded with a spectacular view of the city.

You'll take a short ride to the silent, grass-covered Piskarevskoye Cemetery. Over 500,000 dead are buried there, the victims of the German siege during the Second World War.

Discover the greatest museum among the great museums, the Hermitage! Lavishly decorated and fastidiously maintained since it was founded by Catherine the Great in 1764, its gold-leafed rooms contain works of art of inestimable value. Much of this art is European, imported by an admiring Russian aristocracy.

Consider a stroll along Nevsky Prospekt. The wide boulevard that inspired Gogol and Dostoevsky is famous for its shopping venues and sparkling nightlife. Landmarks include elegant department stores, the shopping venue known as Gostiny dvor, Kazan Cathedral, the Stroganov Palace, and much more.

The Palace of Versailles is magnificent, but the palace built by Peter the Great as a summer retreat is greater still as you will see during your visit. Its construction, begun in 1704, extended for decades. See the Upper and Lower Parks' spectacular fountains and waterworks (the Sea Canal is connected to the Gulf) as well as the elaborate palace dreamed by the brilliant Tsar.

Plan a visit to the State Russian Museum, a huge depository of Russian fine arts from the 17th to the 21st century, which is known for its excellent collection of paintings.

Plan to visit the Cathedral of Our Lady of Kazan, home to the Museum of Religion and Atheism since 1932. Pictures, photos, sculptures, models, and other exhibits trace the origins and history of various religions and atheism from ancient times to the present.

An evening theater or folklore performance provides entertainment this evening.

Dasvidaniya! The time has come to say goodbye to Russia. Memories of a strong and courageous people will animate your reports to friends and family.